Today Stella and I checked out Vjunior cinema at Village Southland, a new cinema experience which has been designed especially for kids 3-10 years! Stella has been to the cinema quite a few times in her short little life but she has never experienced anything as exciting as this before! 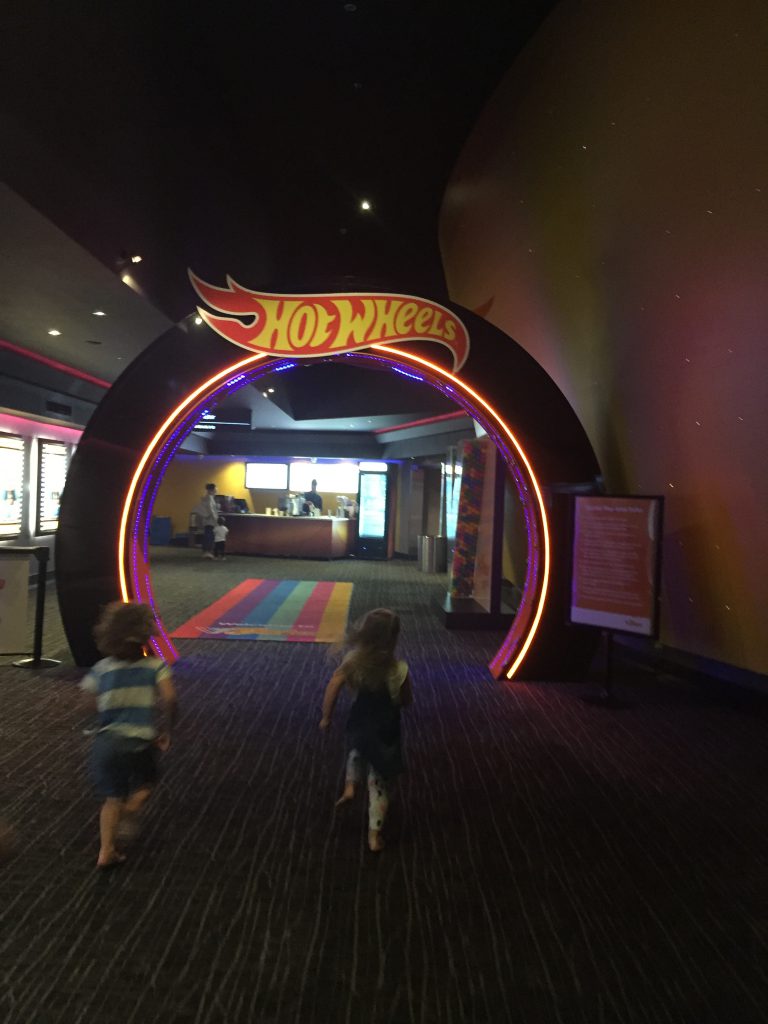 There are three different seating sections to choose from; reclining, bean bags or regular (we chose bean bag for the novelty factor!), a giant slide (yes! inside the cinema!), an interactive foyer with colouring, Hot Wheels tracks and Mega Bloks building wall, this area opens 30mins before the movie begins. There is also a small dance floor at the bottom of the screen so the kids really can get up and go for it when ever they feel like it! Yup, it’s full on to say the least! 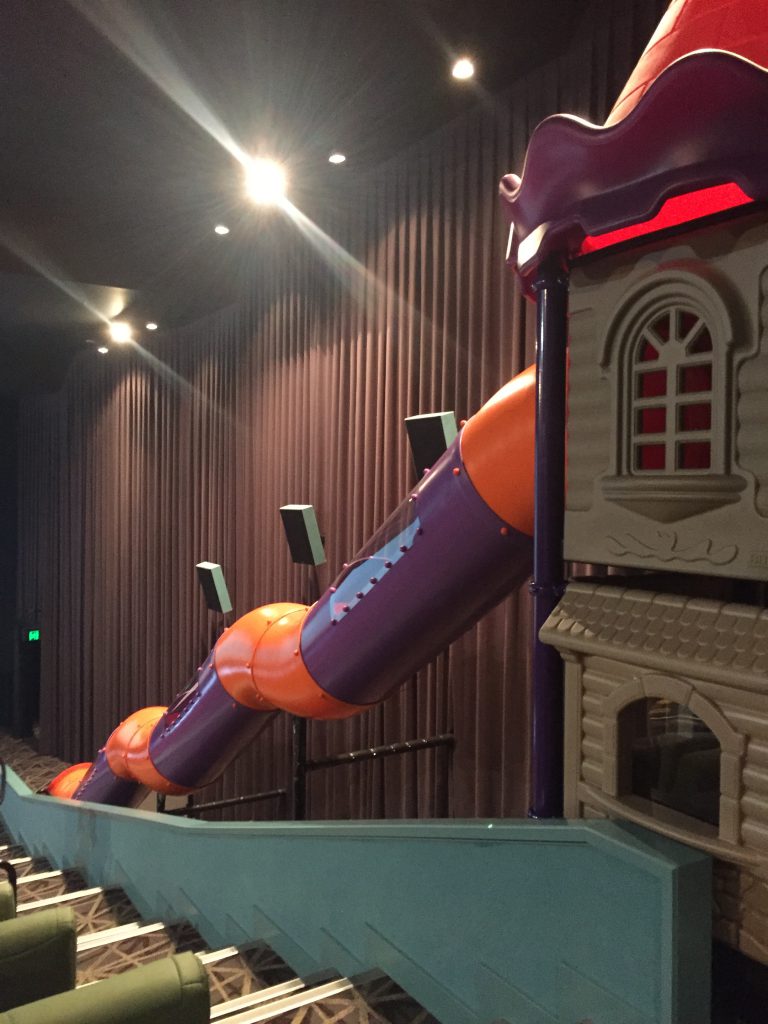 We were running late (of course… baby, toddler, get your shoes on etc…) so we took our seats just as the movie was about to begin (from what I can gather there wasn’t many previews) but I wish I had been more organised and arrived earlier as the foyer outside the cinema was really cool and perfect for a little play before taking your seats. We did however get to go out there during the 10 minute intermission which I thought was a great idea for the little ones as it allowed a quick play and toilet break. 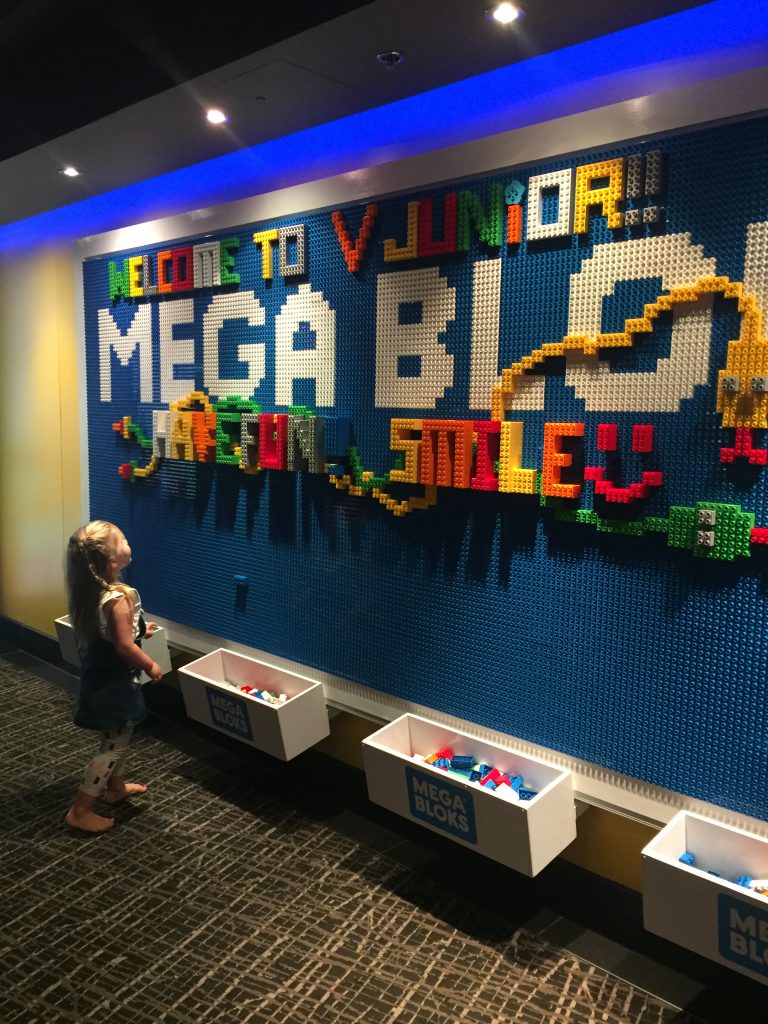 It’s also good to note that Vjunior also has its own snack bar within its foyer which was a welcome sight as I had promised Stella popcorn but the queue to the normal snack bar out the front was huge and given we were running late I had sneakily bypassed it on the way in! We purchased a kids popcorn pack (popcorn, freddo and juice box) which was $10 (I thought this was reasonable value given the price of “adult” popcorn deals) and there was even a coffee cart! Yes! Thank you Vjunior designer Mum Gods!

The cinema was full of toddlers and their mums (and dads!) and it had a great energy to it! As soon as we took our seats Stella was instantly excited, vibing off all the other children.

We booked the 10am session of “Pepper Pig – My First Cinema Experience” which is perfect for preschoolers consisting of six little Pepper Pig episodes, broken up by a singing and dancing Pepper and George and their friend Daisy. This on screen interaction is great as it allows the kids to have a little leg stretch as they sing and dance along with the loveable trio before the next episode of the movie begins.

The movie ran for 1.5 hours (including intermission) which was the perfect amount of time for the toddlers attention span and we both thoroughly enjoyed watching the new episodes of Pepper including the ones where she visits Australia! I am glad that we went before school holidays begin though as I can imagine it could get really hectic in there, especially with school age kids running about! A great movie experience though! We will be back (did someone say Boss Baby?!). 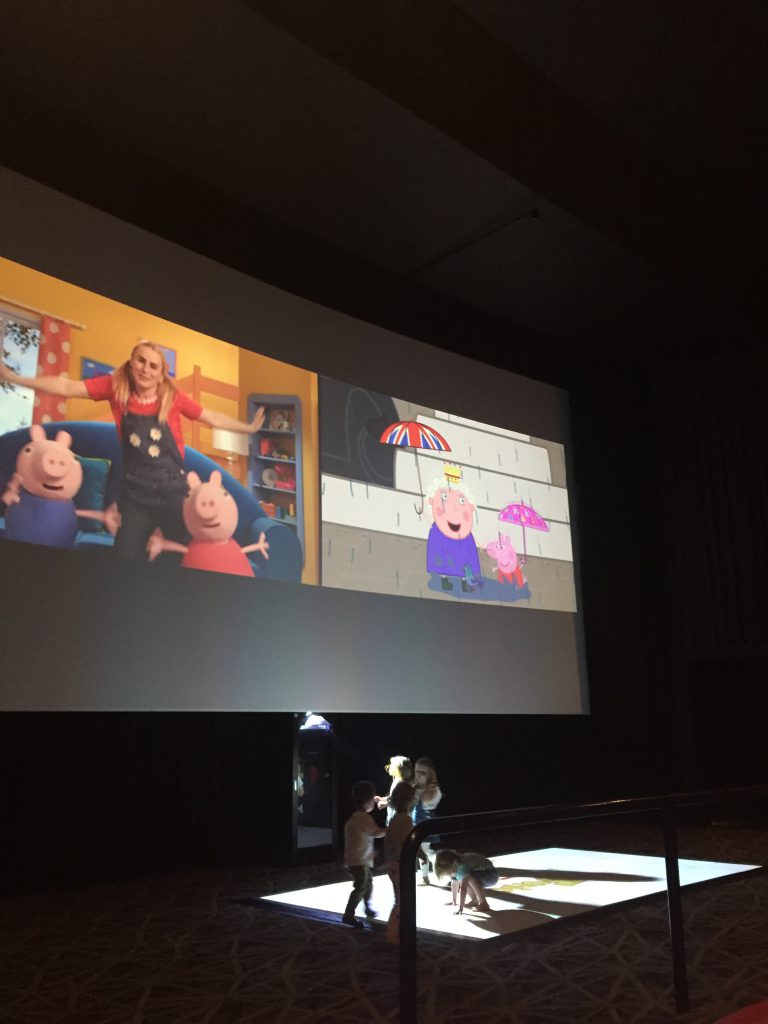