SISTERS ARE THE BEST OF FRIENDS (SOMETIMES)

Recently I realized something had changed in our household. Something phenomenal. Something I actually never thought possible.

As I was making dinner one night last week things were strangely peaceful. There was a calmness in the house, a blissful quiet, rare, calmness…

Our children were playing TOGETHER.

They weren’t bickering over who stepped on whose foot, whose Barbie dress belonged to which Barbie, whose scribble ruined the other one’s masterpiece drawing, whose Troll was the one with the pink hair. There was no screaming, no growling, no hitting, no scratching, no stealing, no frowning. They weren’t or fighting over a book, a bowl, a spoon, the last yoghurt. 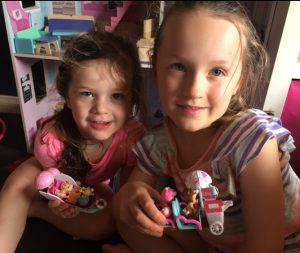 They were role playing together, they were laughing, they were actually enjoying each other’s company.

It was a miracle. And suddenly it dawned on me that this has been happening quite a bit lately, ever since Penny turned three.

They have discovered what games they both enjoy playing together and they have worked out their own dynamics. They are communicating. They are learning about each other. They are becoming friends. 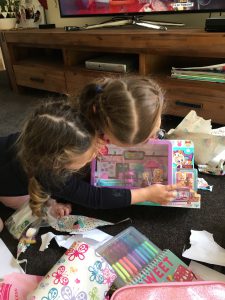 That night, while I was cooking dinner, they were happily playing in Annabelle’s room and had decided to play schools. Penny was the student and Annabelle was the teacher. They had it all sorted. Penny came out wearing Annabelle’s school uniform and hat and my heart skipped a beat, it was the most adorable thing I had ever seen.

Then they proceeded into the playroom where Bella pulled out the Magna Doodle drawing board, Penny sat down on a bean bag next to her and listened to her like the perfect pupil while Annabelle taught her the alphabet. I listened as they went through the entire alphabet, Annabelle speaking in a guiding teacher’s voice and Penny learning intently. I continued to stir the pasta sauce with a smile on my face. 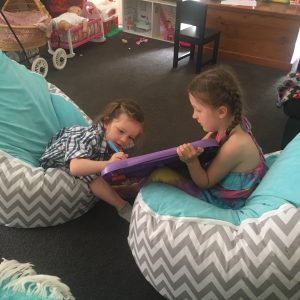 I know it’s not always going to be like this, I’m not silly, they are siblings (sisters are probably the worst) and they will still bicker, but tonight, watching them play happily together, showed me just how lucky I am to have them, and how lucky they are to have each other. A sister always on hand to play with, a sister always there by your side to be your friend. 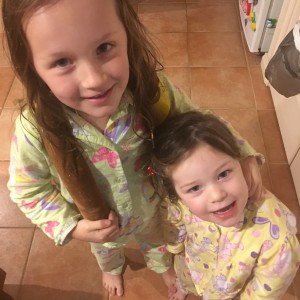 Ok, so maybe I spoke too soon…