Today, my four-year-old daughter Annabelle started prep (she turns five in a little over a week).

I thought I would be the type of mother who would jump for joy at the thought of some peace without one of my children for a whole week, but this morning I felt quite the opposite.

Today represented a few things for me. It signified that my little girl, my first born, is growing up…fast. It signified a new chapter in all of our lives and a sure tell sign that we, as parents of a school aged child, are getting old…fast. 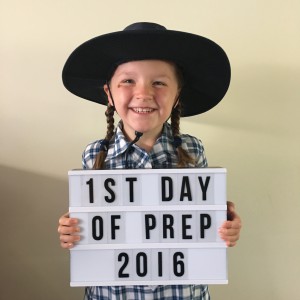 It’s the beginning of an amazing new era for my little muffin and one I am so excited she is about to embark on and begin creating wonderful memories. But a part of me was terrified that she was on her way to a place where I won’t be there to protect her. 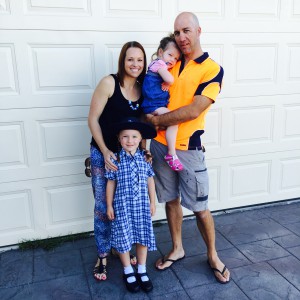 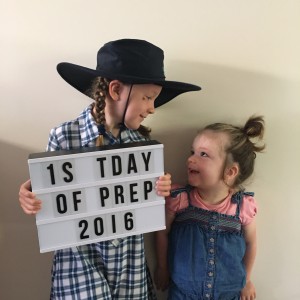 Outside influences will creep in, other kids will teach her things she may not be ready to learn and there’s nothing I can do to about it. Although I have no regrets sending her to school as one of the younger ones, we believe she is ready and her kinder teachers agree, I don’t know if I am ready for her to start losing her childish innocence.

She’s a sweet kid, a dobber at times, a do-gooder perhaps, but a child who does not like to break the rules. She doesn’t like scary things, frightening movies and she believes in magic, kindness and the Easter Bunny. She is happy with her hair, she likes her outfit choices, odd socks and dorky headbands. She looks in the mirror and she likes what she sees (Ok, so I’ve probably fed her that confidence by telling her she’s clever and beautiful every single day, but she’s my baby girl, how could I not?) 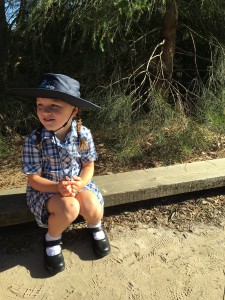 For me school changed a lot of that. Kids told you things you didn’t want to hear; they were nasty. They teased me about my crooked teeth, my god awful bangs (who cuts a fringe on a curly haired kid before straighteners were invented?) then they teased me about my braces, my pot belly and my frizzy hair. They told me my runner’s weren’t cool because they weren’t Air Nike Jordan’s and my fake Billabong matching tracksuits were lame because they weren’t the real deal.

They teased me about my freckles and the moles on my skin and the fact that I had chunky thighs when I wore briefs on the school sports days. All of these things I would never had known were a problem, would never have been ashamed of, until they told me so. 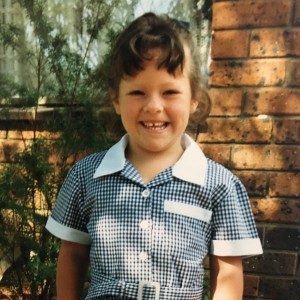 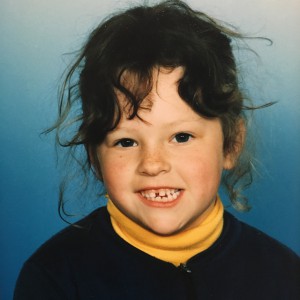 One of the worst days of my life happened in primary school, Grade 6. I had not long gotten braces and I was self conscious about them. I’d had an argument with a friend earlier that day and her payback was vicious. As I walked by the basketball stadium, the kids began to chant like a train “choo choo choo choo” as they marched along with their arms moving like the wheels on the train tracks. Of course I cried and ran inside to tell a teacher (not sure where Annabelle get’s her dobbing from?). 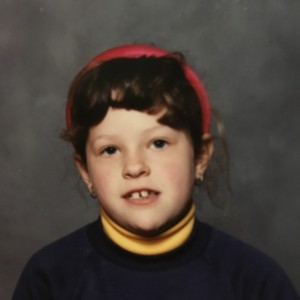 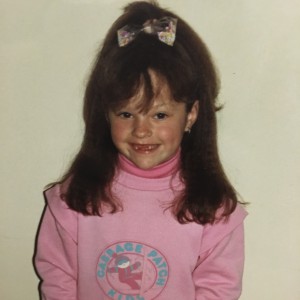 I hope she never has to go through anything like that, being the ridicule of the school, even though it only lasted for a recess. I hope the kids at her school are kind, appearances don’t matter, they know the inside is what counts, and the other parents have brought them up to respect others and be nice. I know I’ve taught these things the best I can and I hope she is strong enough to stay true to those lessons too no matter what comes her way.

At the opposite end of the spectrum I do remember a lot of good times at primary school, and this is what I am trying to focus on as I sit here sipping on my coffee alone after dropping her off for her first real day.

At primary school I laughed a lot, I made a friend for life with whom I still hang out with today, I met the most coolest, popular and funniest kid who, I believe, is still those things today. I formed a love of writing stories and have now made a career out of it, and I learnt how important and fulfilling being active can be. I learnt kids can be nasty but I also learnt not to take their coldness to heart because their mean behaviour is their fault, it’s not about me. I learnt people look and act differently, as long as you are yourself, you will always be ok.

And these are lessons I am going to teach my Annabelle. Be kind, be strong, believe in magic and always be proud of who you are. What more, as parents, can we do? We can’t wrap them up in cotton wool and keep them in our pockets forever, we have to let them go sometime, right? And I guess, the first day of school is as good a time as any.

As I watched her giggling with her little friends this morning, each of them as eager as the next, admiring their matching school uniforms, hair braided, shoes shiny, wearing their massive hats and bags, I knew she would be OK. Just like I am. 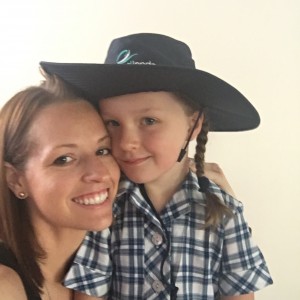 
Lovely to read your beautifully composed memories of your own childhood. Xxxx


Lisa you have always been a beautiful soul and no doubt your two little girls will be every bit as loving,caring and sensitive of others needs as you were and still are.. Lots of wonderful memories of a young Lisa who’s smile was as bright as an evening star. ❤️


Awwww thanks Julie that’s so nice of you to say that! Xoxox


NiQIdK Im no professional, but I believe you just made the best point. You clearly understand what youre talking about, and I can really get behind that. Thanks for being so upfront and so truthful.


Thanks so much for the blog post.Thanks Again. Great.


I think this is a real great blog.Thanks Again. Want more.