NO USE CRYING OVER SPILT YOGHURT

Bad shit always happens when you’re in a rush doesn’t it? It’s the usual story. You’re running around late, again, like a headless chook and then…BAM! Something (something meaning something usually wet, sticky or precious) goes flying.

Well, this morning was one of those mornings. We had somewhere to be but I slept in, which meant the kids woke up before me which meant big mistake – HUGE.

You see, I was helping out a friend by taking her kid to school and usually that would be no trouble at all. I would be ready and my kids dressed and fed before her little darling had even stepped foot in my house. But no, not this morning, because as previously mentioned, this silly billy old mum had forgotten to set her alarm.

Huh? What? Who?! No, go away Julia Morris, he’s mine… DING DONG! Huh?! Oh! Crap! Oh no! They’re here! Noooo! I’m still in my pj’s! There goes my sacred shower, hair straightening, make-up applying me time!

I look to my left, not only is the door bell ringing but Annabelle is standing there, watching me with a confused look on her face… “Mummy, who’s Dr Brown?”

Ummm…no one honey… I run and unlock the front door “Hi!” 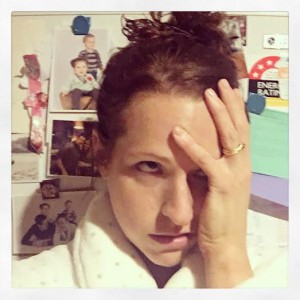 Breakfast. Annabelle was adamant she wanted raisin toast and nothing else. Thankfully, we had three slices. One for each of the kids. That’s fine, I’ll settle for my usual yoghurt and muslie.

I pop the raisin bread in the toaster, get the yoghurt out the fridge, give it a little sniff to make sure it’s all good, meh, a bit runny but within the use-by so all good…until…I drop it.

I drop the 1kg huge blumming tub of Greek yoghurt…. It gets better. I then awkwardly attempt to catch it, one hand reaching out for the white spinning container, the other clutching my Carmen’s Kitchen $8 a box (gold encrusted) muslie with the other, but I don’t catch it, I smack it, which only makes it fly higher, landing on the floor and splattering every which way it possibly could including into the open draws and open pantry.

Awesome, just awesome. Especially as we all know yoghurt stained anything always ends up smelling like stale spew which is my absolute worst nightmare.

I look at the clock on the microwave. It’s 8am. We are supposed to be out the door by 8am.

What’s that burning smell? No! The toast! The raisin toast, in all it’s fast cooking glory, has burnt. Annabelle screams. She’s cracked the shits and starts crying because I’ve; quote, “ruined breakfast”.

Eventually after much persuasion, she’s forced to settle for wholemeal toast with sultanas and honey on top. I pop the next round of bread in the toaster and start the yoghurt tsunami clean up.

BEEP BEEP BEEP! What the?! The smoke alarms going off, now Penny’s screaming because she’s afraid of the noise. I’ve burnt the second lot of toast. This then sets Annabelle off again, she starts going nuts like Rain Man during one of his “episodes”.

I run to get the tea towel to flap in front of the smoke alarm to stop it from beeping the batteries out of itself (and to stop me from turning into Dustin Hoffman myself) and of course, I go ass over tit. Ass over tit in the splattered yoghurt, which, naturally, is much more painful when you’re that little bit older, have popped out two kids, woke up disorientated to start with because you sleep next to a snorer and have wrists which resemble ET’s.

My inner “patient mummy” starts whispering to me. Hold it together Lisa, remain calm, don’t show the kids how much pain you’re in and how frustrated you are at the whole situation because we all know mess when running late sends your anxiety levels into the red zone. My inner “crazy mummy” wants to scream out various words which are totally not suitable for little ears, two of those ears of which don’t belong to my own children.

It’s then, at that moment, Annabelle decided to turn to me with her sweet little face and pipe up with “you’ve really made a mess of today already mum, haven’t you, and it’s only morning time”.

All I can do is laugh. Oh Bella. Gotta love kids for stating the obvious.

Oh well, no use crying over spilt yoghurt… 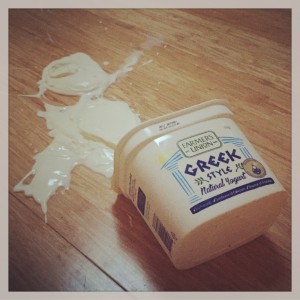 
Hahaha oh Lisa what a nightmare. I feel your pain. It is nice that you can share your hideous adventures with us so we remember that our chaotic lives are normal


3jA7na Spot on with this write-up, I truly think this website needs much more consideration. I all probably be again to read much more, thanks for that info.