Did I just spend an hour in Bikram yoga or Hell?

This morning I decided to try Bikram Yoga on my daughter’s recommendation. I thought “I’ve got this, I can handle this, it will be fine.’’

Admittedly, I was a little nervous given my daughter had said it was very important to do the breathing right and be prepared for the heat. How bad could it be? I’d given birth to three kids and stayed married to a man who has snored for the last 40 years; I thought I’d be fine.

The class was conducted in an extremely hot room and I mean HOT. As soon as we started to stretch, I started to sweat… profusely. But I looked around and it appeared I was not alone. Everyone else was sweating too. We started off with the correct breathing for yoga. In through your nose, out through your nose…but being a mouth breather I knew I was in the shit.

That was when I started to struggle. The panic set in. I was convinced that I was going to pass out, vomit or die. Any one of those would have been fine at that point as long as I didn’t have to continue to stay in a down ward dog position in this sauna.

I asked the instructor if I could leave but she said to just lie down on my back, breathe and relax. “HELLOOOO who relaxes when they think they are going to vomit in front of a room full of people!”

So, I lay down only to realize minutes later that I couldn’t get back up! I couldn’t even lift my head! The class finished and I had to lean on my embarrassed daughter as she carried me just out the door of the yoga room where I laid back down again!

As I said, I’ve had three children and truthfully I think giving birth was better – at least I had something to hold onto during it and something to look forward to at the end.

Unfortunately, I’ve paid for a months worth of classes so I guess I’ll be back next week! Fingers crossed I get through it alive next time! 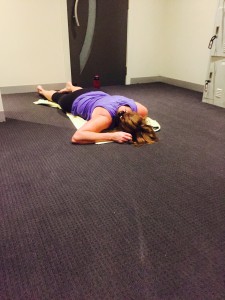 Written by guest contributor, Kim (59, a Mama loves to share Mum and Grandmother of two girls).


This is an absolute pisser!


Ha ha yes we thought so too Nic!


Thanks very much Lisa lol.


Ha ha! you will have to write another one now though about your next visits to reassure everyone that you survived and it got easier


I really like and appreciate your blog.Thanks Again. Want more.


This blog post is excellent, probably because of how well the subject was developped. I like some of the comments too though I would prefer we all stay on the suject in order add value to the subject!