The best advice I can give you if you’re planning on camping with a toddler as active as mine is… Don’t do it! It’s utterly and completely exhausting! 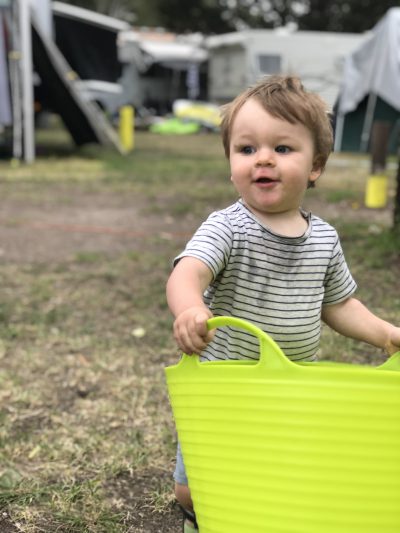 I’ll be honest, I’m not much of a camper at the best of times. I don’t like the mayhem of packing while the kids are at your feet, the setting up arguments, this time on a 40 degree day; “just put the fricking full annex up, honey, so we don’t get dust on everything, comprende!”. The constant dirt, the not showering for days, the toilet journey’s in the middle of the night, sleeping in one tiny room with three snorers and a kid who gets nightmares, the cranky kids cause they’ve stayed up too late, the naughty snacking every half an hour (and yes, that was mainly me!), the messiness and disorganisation of things; it all just sends me into a bit of an anxious state. 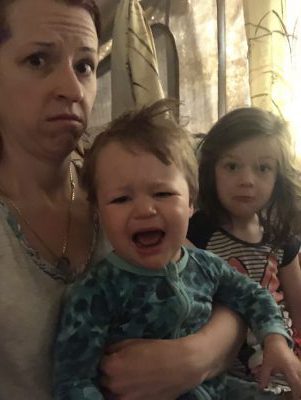 So, when we became one man down – Hubby injured himself just before Christmas – before we were to head off to Eagle Point for our annual New Years camping trip, I should have had a good hard look at the situation. And when two of the kids plus myself had tonsillitis and an ear infection, we probably should have questioned things too.

I should have definitely aborted mission when the packing fun began (which involved 2.5 hours of changing all three car seats over to the Ute so that we could take the Kayak that we didn’t even unwrap anyway) with two bored girls driving me crazy with their arguing over Journey Girl outfits and Jacob escaping up the street several times during the day followed by him pulling everything I’d just packed out of the bags, including a whole packet of biscuits (I guess it would be fun to shower yourself in Savoys and then jump up and down on them to see how many you could crush?). 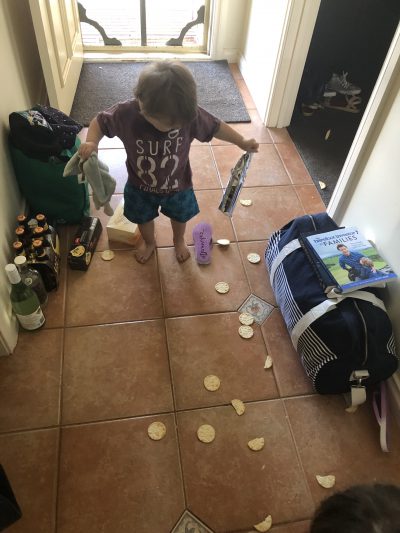 But although the mere thought of chasing our 16-month-old daredevil/explorer/climber/runner/chucky doll around at a campsite with Hubby unable to get to him fast enough as he hobbled on crutches in a moon boot, sent shivers down my spine, we decided to be stubborn and stick it through for the sake of the kids. They would have been devastated if we had of cancelled. We had to stick it through although we knew it should have gone in the “too hard basket”.

Preferably, I’d choose a holiday in a luxury apartment, with a view, air-conditioning, a bath and a crisp white sheets on a king size bed, I know camping with the kids is the best experience we can give them. Admittedly too, I do love chewing the fat by the fire at the campsite, spending lazy days reading in a camp chair, walking, swimming, etc, while the kids ride their bikes around all day merrily, not bothering us for hours while they play… 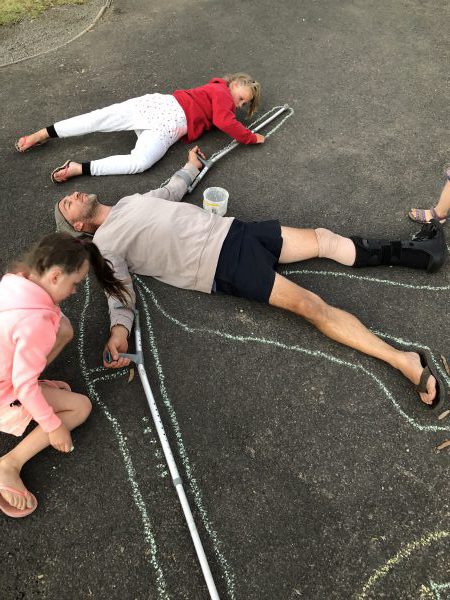 But unfortunately most of that didn’t really happen this time. The sitting part and the reading part especially. I didn’t read more than one page of my new Jodi Picoult book (wahhh) and I didn’t sit down during the day for more than ten minutes, even while I ate. Except for maybe at 10.30pm when we finally conquered the fun of getting all three kids to sleep before 10pm. Chucky deciding it was much more fun to rock in his travel cot, yank down all the curtains he got his hands on and throw his teddy and dummy overboard for two hours every single night… Joy.

During the day when he wasn’t running toward the road, eating dirt or a cigarette butt he found on the ground, picking up fishing knives, banging his head on tow bars, tripping over tent ropes, pooing every half an hour, crying because he didn’t want to go to sleep earlier than 9pm or splitting his eyebrow open on a cabinet inside the caravan, he was popped in the highchair and fed copious amounts of food or given to an older cousin to be “babysat” before we collapsed with exhaustion. 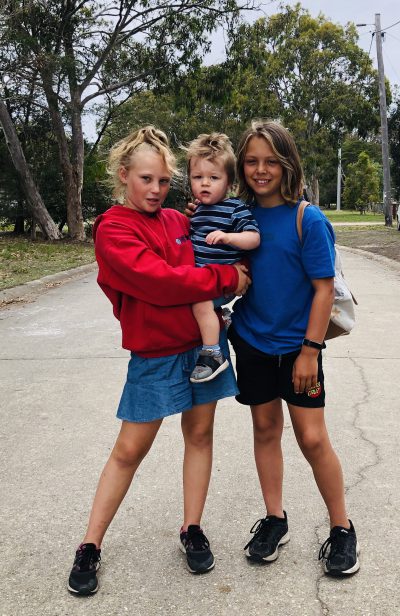 Pretty sure by day three I resembled a Encino woman. My feet and fingernails covered in grime, hairy pits because I forgot my shaver, gross green bits in my teeth because I forgot my floss and my frizzy crazy out-of-control cave woman hair a mess because I decided to cull my straightener and hair dryer during packing. Oh but on night five my stench was masked by the smell of Midouri when I accidentally knocked my own drink all over myself! 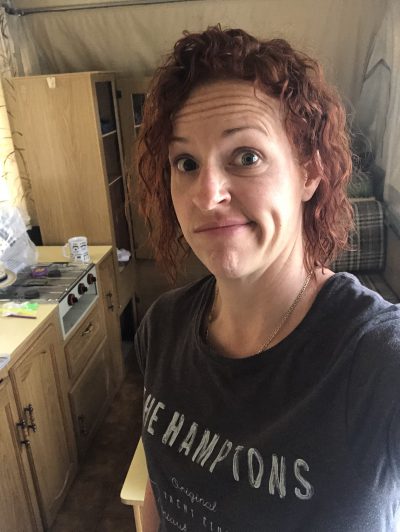 I know I’ll look back on this camping trip one day and think… “yeah these were good times”. Because there were a few really awesome moments spent with the kids and with family and friends such as watching the fireworks, swimming in the bay, exploring Raymond Island and spotting koala’s, sitting by the fire chatting, eating Souvlaki’s, visiting an adventure park and watching the kids enjoy their freedom. 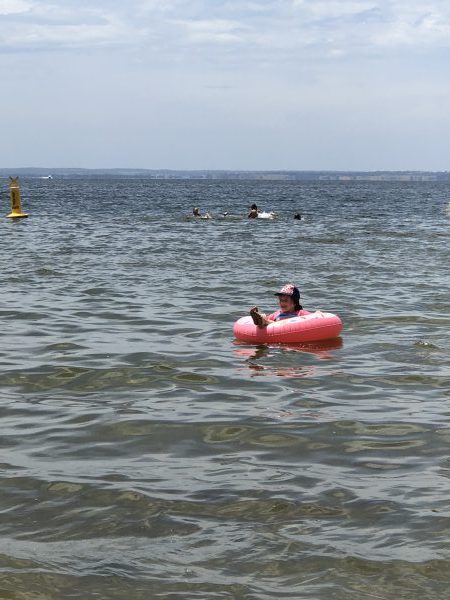 But, despite the fun times, we’ve decided we’re going to put camping on hold for a while until our Chucky Doll Jacob is a little older! It was just too hard and too much work that it wasn’t much of a holiday for us parents (Hubby not being able bodied probably made it worse, yes).

In the meantime, if you do have a camping trip planned and you have to take your little cyclone along (I have no doubt you were probably dreading it before you even read this and I’ve just made it worse, sorry!!) here are a few of my tips;

*Bring a highchair! You can pick up a camping highchair from Kmart for around $30 – $40 or the Ikea one is perfect for travelling because you can take the legs off! 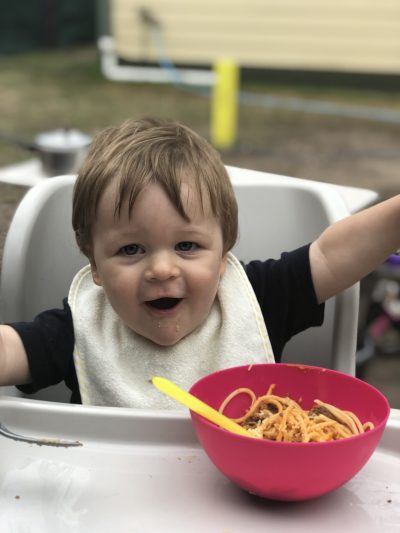 *Get a travel cot! I picked up mine second hand on Facebook for $50 and it was so easy to assemble and didn’t take up as much room as a regular portacot. We also used ours as a playpen outside.

*Consider taking/buying a playpen. I was dead against play pens, even though I was put in one as a kid, but if it means they are contained for even just 20 minutes while you take a little breather, it’s bloody worth it!

*Take toys! It’s easy to say, “Oh they will find their fun in nature”… Nope, they have an attention span of a Jack Russel puppy, you can never have too many toys! 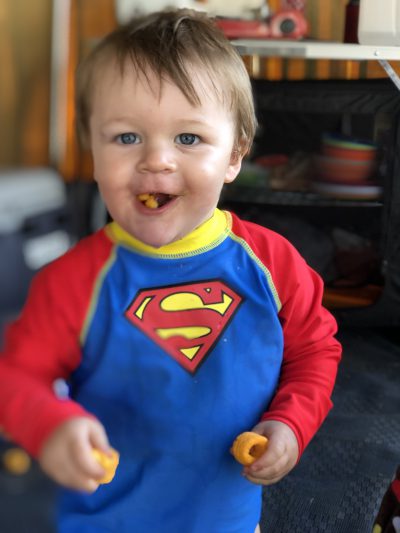 *Be open to a child harness. There are so many dangers around while camping such as fires, fishing equipment, tent ropes, tools etc, we wish we had of had one at times just to stop him from wandering off.

*Take a trike. Even if your toddler isn’t quite ready to ride one, camping is the perfect time to learn to ride a bike. All of our kids have learnt to ride their bikes while we have been staying at caravan parks. Unfortunately we forgot to take one for Jacob this time.

*Don’t forget the pram. If they don’t go to sleep in their bed’s as planned, a nice walk outside in the pram is calming for both the child and probably more so for you!

*Drink wine. And when you run out of wine, drink Hubby’s CC and Dry’s.

*And above all, remember why you are doing this. You are creating wonderful memories for your kids, even if you don’t have the best time, know that your kids don’t have a clue about all that, all they know is they are having an absolute ball, playing, exploring and discovering new things. 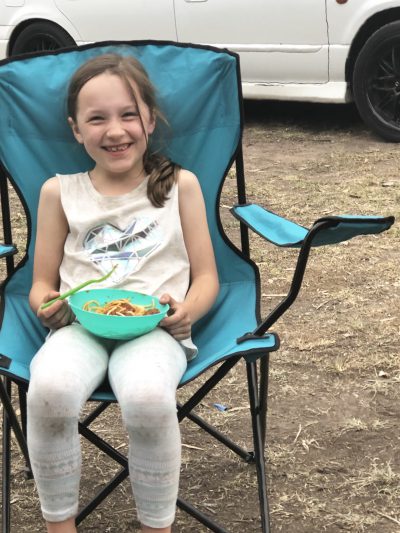 So, fellow campers, we will see you again in 2022, but until then, we’ll be opting for luxury cabins and hotel stays!