It’s Thursday the day before Port Douglas we were mostly packing for the morning but then we went shopping. We will be staying at our friend’s grandparents holiday house. Our friends are staying with us too for three nights while we are there, their names are Zara who is eight like me, Harper who is 5 like Penny and Mac who is a little bit older than Jacob. Oh and their parents Glenn and Danielle. And I’m sure that when we get there Zara will give us a tour around the house. Anyway, I have to go have dinner now and get into my PJ’s, bye! 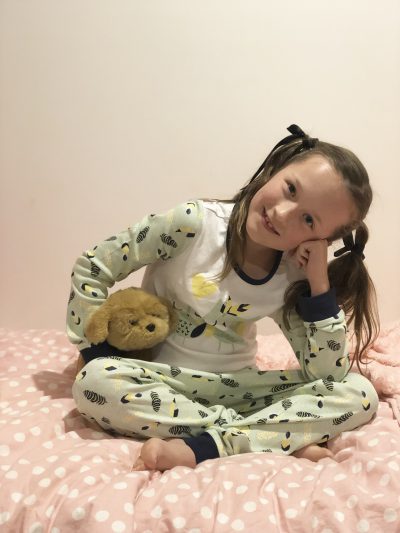 It was a bit of a long drive to Tullamarine airport. We left very early and it was 3 degrees when we left. It took us just a bit more than 3 hours to get there to Cairns. Jacob was ok on the plane and me and Penny watched movies on the iPad the whole time. We also ate lollies. When we got there we picked up our bags from the airport and bumped into Zara and Glenn. It was really hot outside! Eventually I persuaded mum to let me go back to the house in Port Douglas in Zara’s car. On the drive we saw lots of things like wallabies, big rocks and an eagles nest on top of a power line. The mother eagle was even there.

When we finally got to the house (which, to me, took a million years), Zara gave me a tour of the house, it was huge!! Then after that we got our bathers on and jumped in the awesome pool. 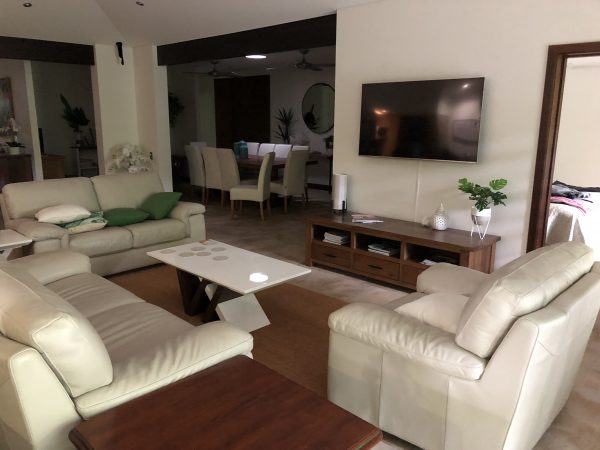 Today we went to Mossman Gorge. It was really nice. There was lots of big rocks to walk and climb on and a board walk. Then you come to stop at a really pretty water hole where there was lots of beautiful fish and plants and a bit of sand. Then there was a walk to a waterfall. It was nice. After the walk and seeing the waterfall we were all feeling very hungry so we went home to get some food and for a quick swim in the pool.

In the afternoon we went to Rex Smeal Park which had a beach, palm trees, a playground, vines to swing on and a really good tree to climb. Then that night we went to a place called Chilli’s for dinner. I had a Hawaiian Pizza and a fresh juice, it was very yummy. 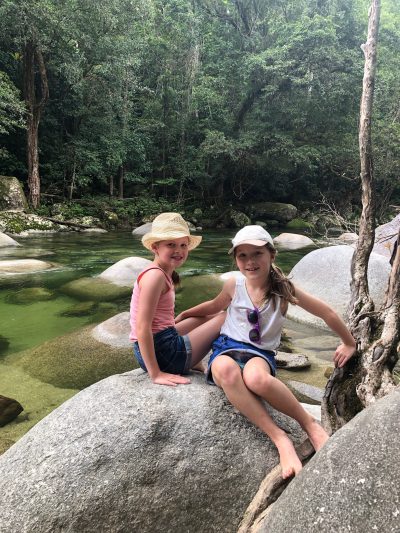 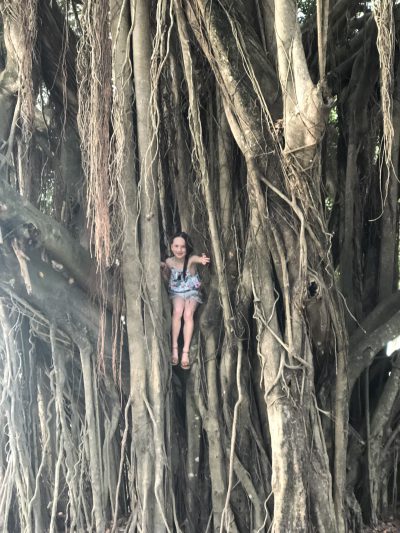 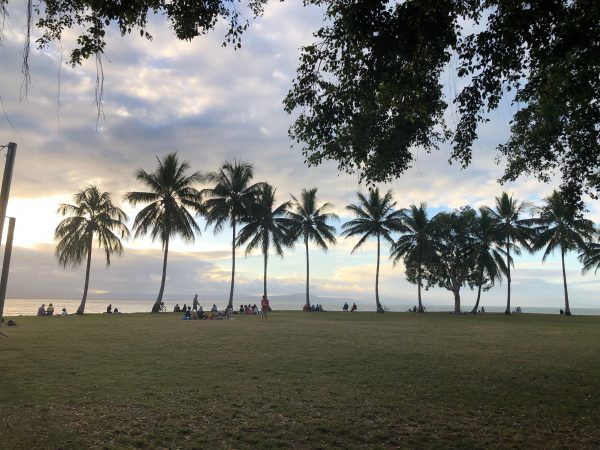 We went to the Daintree Discovery Centre. There was a nice walk through the rainforest. It was a bit like Jurassic Park with dinosaurs there too and then there was also a cafe. The boardwalk had lots of interesting animals to look at and we had lunch at the cafe, I had a ham and cheese croissant. We also went to a cool beach (Cape Tribulation). When we got home for dinner we had chicken and chips and salad. I could not stop eating. After that we watched a movie and had icy poles. 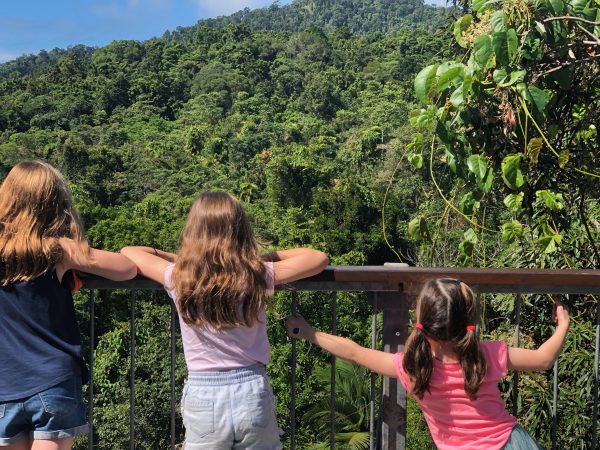 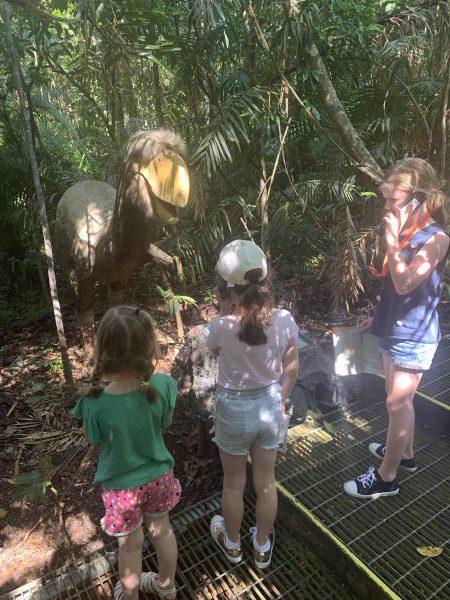 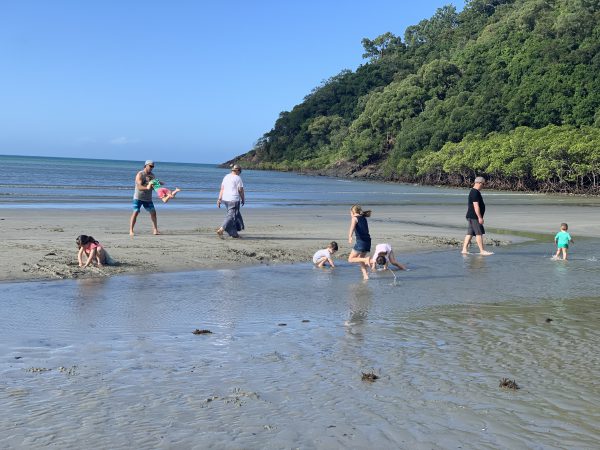 We had raisin toast for breakfast this morning then had a nice refreshing swim in the pool. At quarter to 11 Zara and her family had to leave to go home. Their flight was delayed though and they got stuck in Brisbane! Not for long though. After they had left we went to the Wildlife Sanctuary. Your ticket into the place got you in for five days which was great because I wanted to come back. There were a lot of animals there and while we were there we learnt that if you see a crocodile in the wild you always run as fast as you can in a straight line because after 20 metres the crocodile will get tired and give up. We also saw cassowary’s (mum was VERY excited to see a cassowary), tree kangaroo’s and we fed kangaroos too. A parrot that could talk landed on my head. 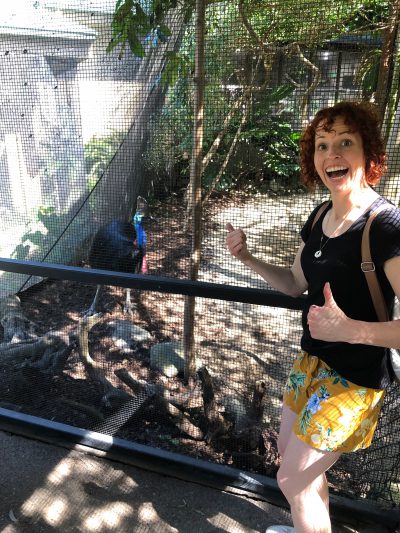 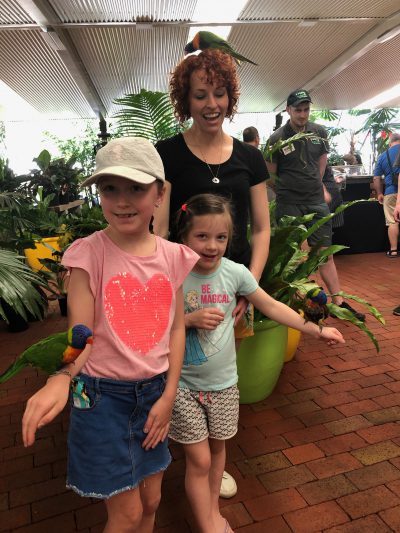 Today we went on a steam train (Kuranda Scenic Railway) up through the oldest rainforest in the world. We saw a rainforest and we went through 15 tunnels and over 5 bridges.  At the top of the mountain we were in Kuranda Village. For lunch we went to a cafe for fish and chips and then walked around the market, shopping and to a butterfly sanctuary. A butterfly landed on Penny’s head and didn’t move for a long time. We had the best ice cream I’ve ever tasted up there too. 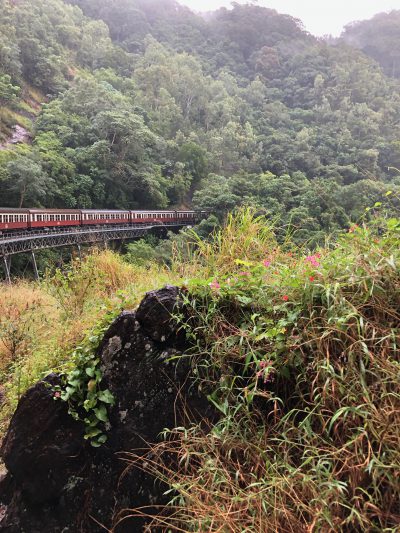 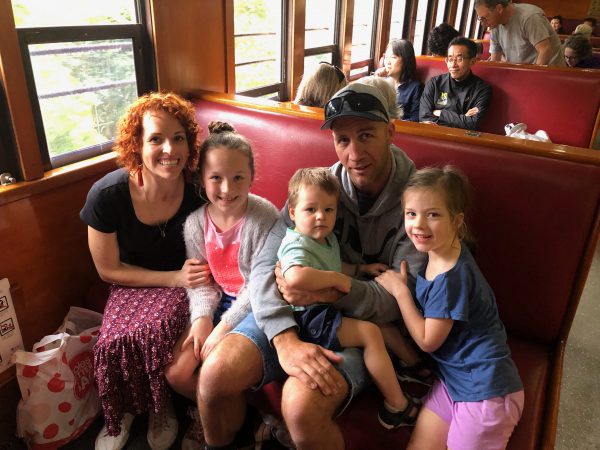 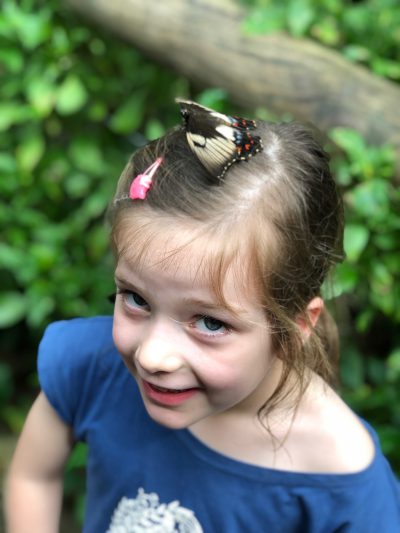 On the way back we got to go down the mountain in a cable car called the Skyrail Rainforest Cableway. I was a bit scared at first because we were so high but then I felt fine and got to look out over the rainforest. It took just over an hour on the way back and we saw the waterfall and some really pretty trees. On the way down we also had two stops where we could get out, one of them was a pretty walk through the rainforest where got to see one of the oldest trees in the world. It was 400 years old! 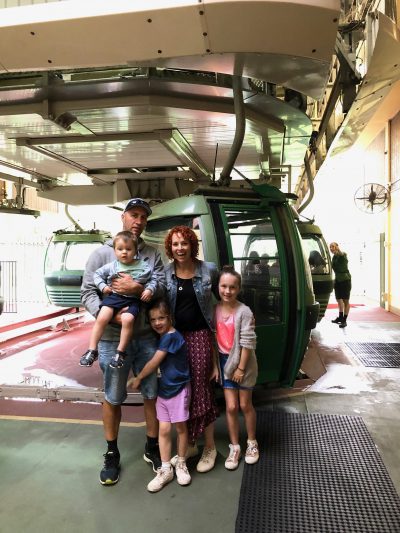 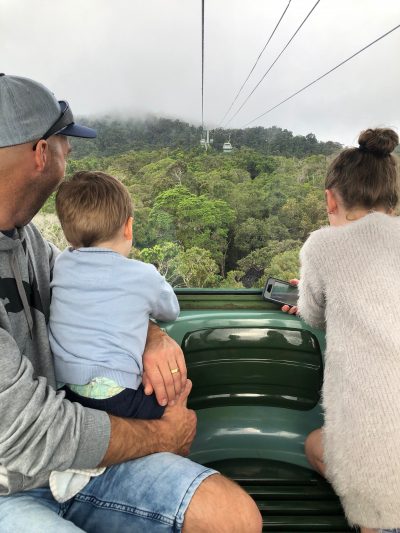 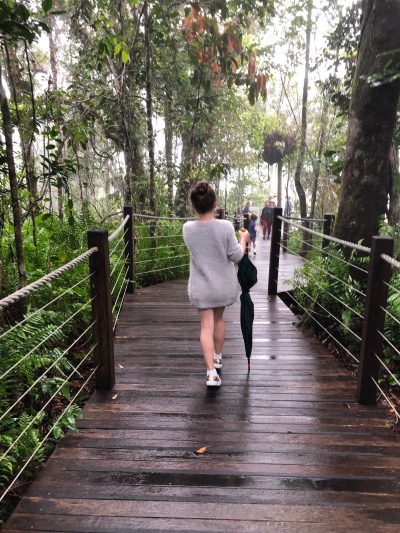 Rest day. This morning we went out for breakfast. I had pancakes with ice cream and sprinkles. Then we went home for a rest and then me and mum went to the wildlife sanctuary again but this time we watched a show about a tree kangaroo. Then we went to a market at the port and mum let me buy a bracelet. 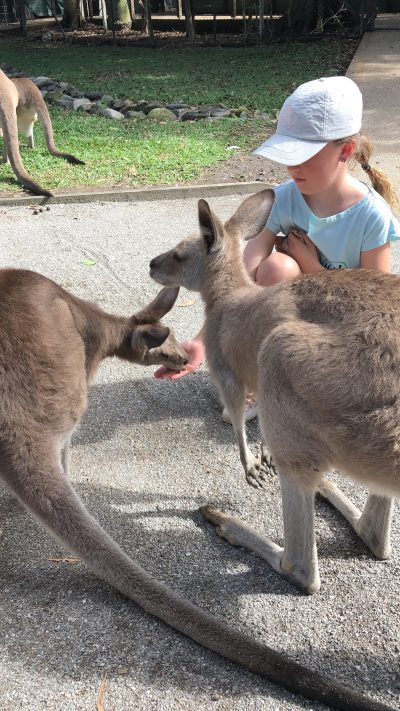 Hartley’s Crocodile Farm. We saw so many animals here like the cassowary, emu’s, snakes, a giant lizard, kangaroos, koalas but mainly we saw crocodiles! Jacob was scared of the big crocodiles when they snapped their jaws. We went on a boat around an island and saw about 50 crocodiles. We had lunch, I had a ham and cheese toast (was a bit soggy I thought so I only ate a 1/4 of it). After lunch we held a koala and watched a crocodile try to attack a man… for entertainment!!! It was amazing. 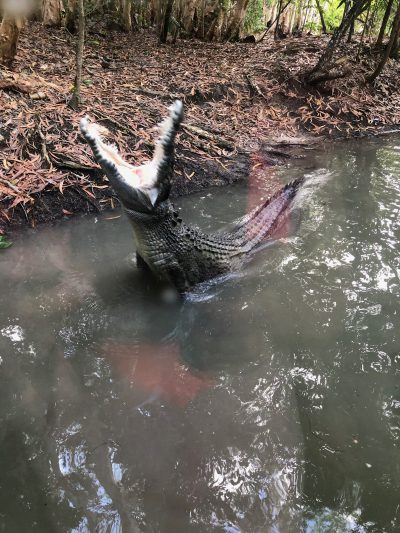 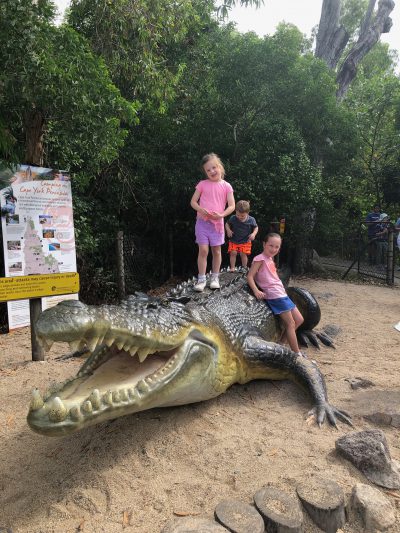 The coral reef. Today we went in a boat (mum got sea sick) to go snorkelling on the Great Barrier Reef, Low Isles. Unfortunately we had rain so you couldn’t really see anything because the water was murky. It was a bit cold in the water too and a bit scary. Out of the water I was wrapped in a towel but I was still freezing with my wet suit on. Not to worry though, the boat had an inside area with TV and a couch and a cafe and I was happy then because I found a spot with the TV and was sitting with a hot chocolate and a plate of about 20 biscuits. 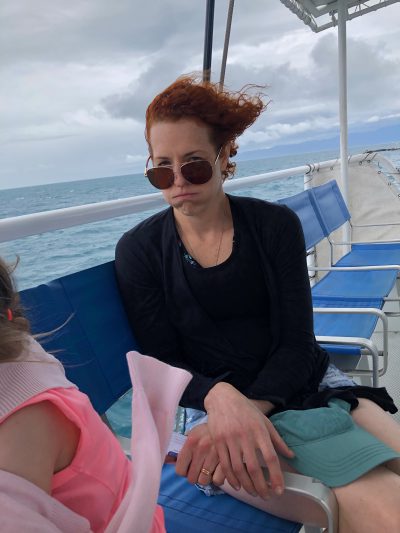 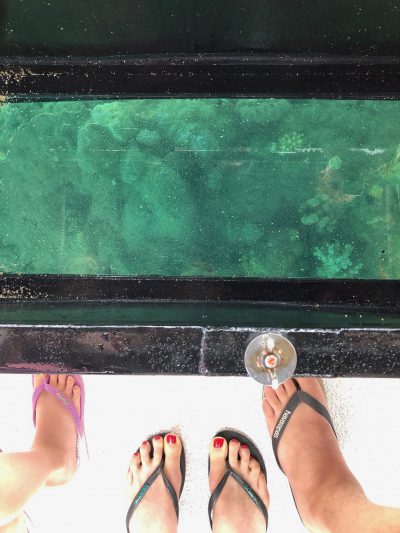 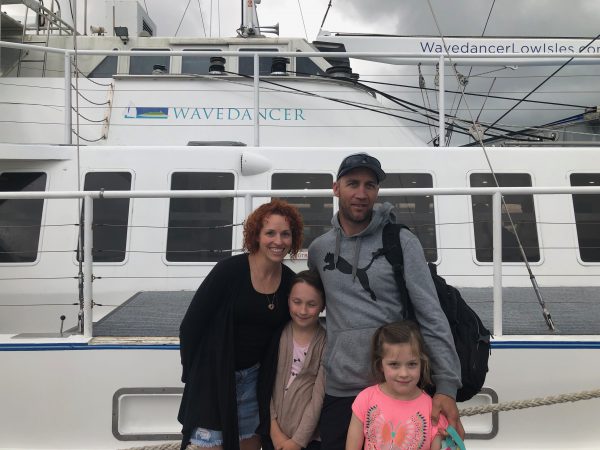 We had a babysitter come and look after us at the house today. Roz. She was very nice. Mum and dad went to Cairns and dad went on a plane to see the Great Barrier Reef. It was a treat for his birthday (which is tomorrow). He sent us photos of him in the plane, he got to sit in the passenger seat. Back with Roz we had a dip in the pool, played snakes and ladders and then had peanut butter sandwiches for lunch. 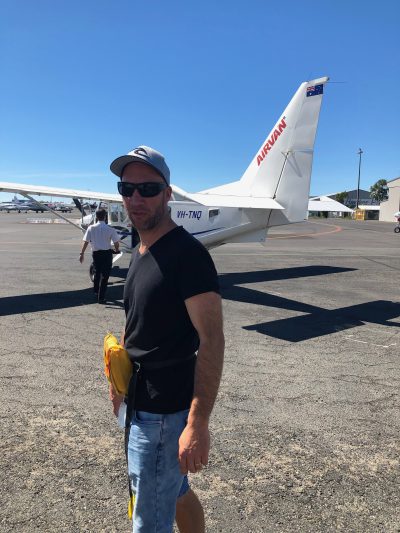 Time to go home. Well that’s what we thought. We were meant to go home today but our flight was delayed. So we had to stay at a resort in Cairns. The resort was nice and sunny though and it had a lot of swimming pools in it and a playground. Mum said she was happy in the end to stay longer in the warm weather. Our friends at home said there was a lot of storms going on. Our flight got delayed again two more times so we stayed the night and left in the morning at 4AM!!!!! 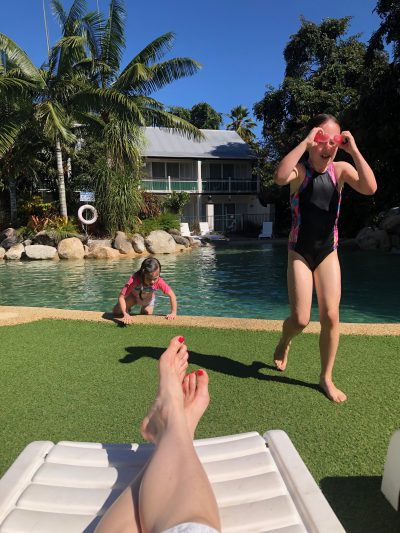 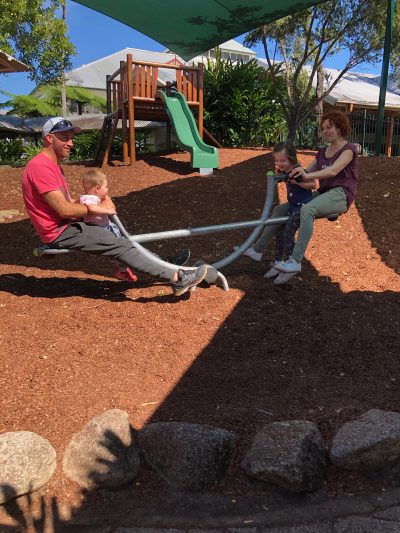 Lucky this flight was not cancelled (phew) and we got on the plane. The best part about the flights being delayed was this plane had TV’s so we got to watch movies the whole way home. We finally got home in the afternoon. We were all very tired.

It was such a great holiday and we hope we get to go back! 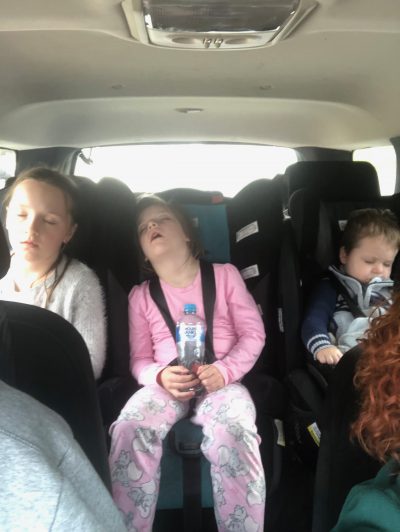 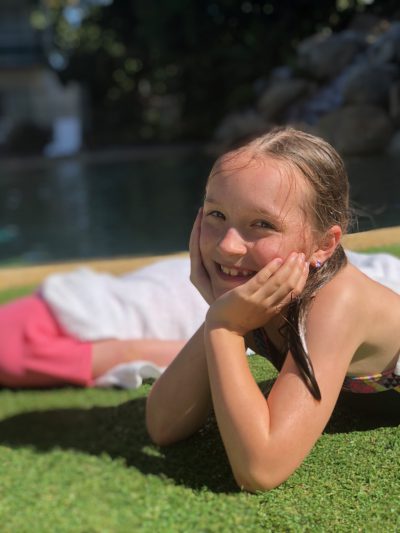